Around the world, lots of indigenous communities use insects as a key source of protein. And this idea is gaining traction in western countries too! But those are bugs that are deliberately consumed, and they’re not the same as insects that contaminate your food and ruin your dish.

Generally speaking, nobody wants beetles in their beer, or even for their pets. You don’t want Fluffy or Fido biting into antennae. So what are some of the common bugs in dog food and how can you get rid of them? Let’s explore these unwanted organisms and how we can control them.

We’re used to finding moths in our wardrobes or shoe shelves because they love to feed on fabric. But meal moths are more likely to hang out in the pantry, where they can gorge on flour, cereals, and other dry goods. These moths routinely get into pet kibble too, so they’re common bugs in dog food. The moth will usually lay and hatch its eggs inside the dog food package.

The larvae resemble worms, and that’s what you’ll spot. They can also get into your dog food by cross-contamination from birdfeed at the pet store. Once they’re in your doggie dish, there’s no getting them out, so just toss the batch. But next time, freeze the food when you get home from the store, then transfer it to clear, airtight, glass or plastic containers with oxygen absorbers. 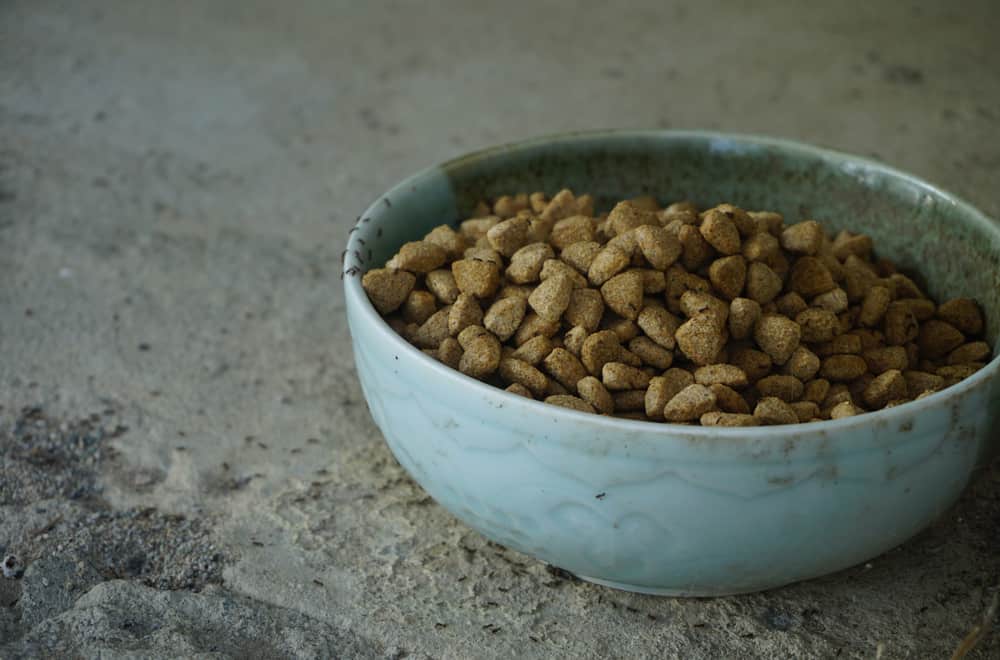 Wet dog food is generally canned until you open and serve it, so as long your dog feeds swiftly, you’re unlikely to find any bugs in it. And most dogs eat quickly, so that’s not really an issue. But bugs can easily invade your puppy’s kibble. Ants will happily sneak into any hole or opening they can find since they’re drawn by the dehydrated fats and sugar content in the dog’s dry food.

Luckily, as smart as they are, ants can’t rip the bag, so if you keep it firmly shut, you won’t have a problem with ants. Instead of using the original kibble bag, store the food in airtight jars that have screw-top lids or suction covers. See-through jars are best because you can spot any insect invaders and you can check the food level at a glance. That way, you can keep track of amounts.

Not all beetles are equal, and warehouse ones are particularly common bugs in dog food. They’re 3mm to 5mm as adults, and hang out in granaries, silos, warehouses, basements, larders, and garages. The last four are typically storage spots for bulk dog food, so that explains how they get into your kibble. Their colors range from dark brown to black, and a female can lay 100 eggs.

These hatch within a week. And unlike ants, the larvae can nibble their way through paper, plastic packaging, and aluminum foil. Their oval bodies are covered with hairs called setae which can cause allergies in dogs and kids. If you spot them, toss out all the kibble then vacuum the storage area and wipe everything with vinegar. Carefully dispose of the vacuumed contents. 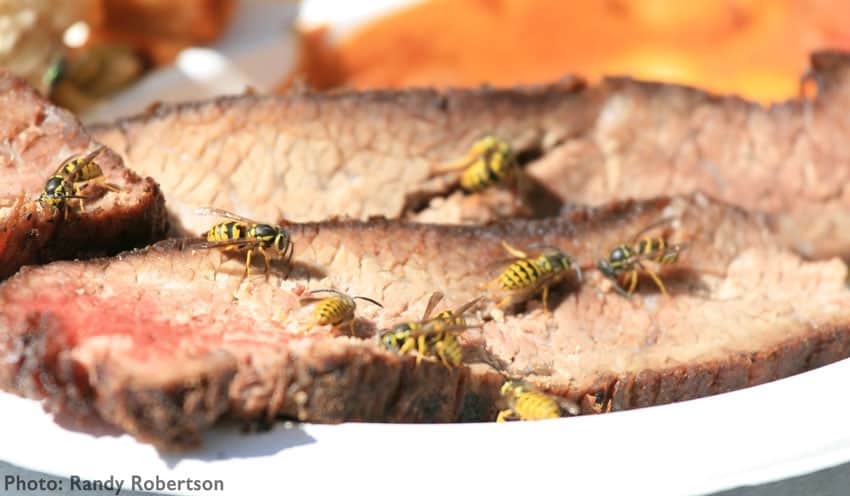 When we think of striped yellow bugs, we instantly picture bees. But there are wasps with that same pattern on their bodies, and they’re huge fans of dog food. They’re mostly attracted to carbs and nectar, but they’ve been known to eat fish and meat. So their attraction to your dog’s dish is sugar-rich kibble and its saccharine aroma. It’s mostly their larvae that eat meat and fish.

Like bees, Yellow Jackets live in colonies of about 5,000 wasps and their queen lays more than 25,000 eggs per season. So if they settle close to your dog food store or your pet’s feeding area, they’re likely to sting your pooch! Adults prefer sugary foods but the baby larvae need protein so their nannies may hunt in dog bowls and attack playful pups! Keep an eye out for nearby nests.

The most common kinds of beetles you’d find in dog food include carpet beetles, larder beetles, and cabinet beetles. If they got into the dog food at the pet store, they may have strayed from other pet food packs. But if you keep dry cereals or grains in your pantry, then cigarette beetles are a threat as well. They mostly attack tobacco, but they also snack on dried fruit, flour, or sage.

These small beetles range in color from beige to black but are mostly a dusty brown. Once they grow into adult beetles, they’re harmless, because they only eat while they’re still pupae or larvae. But the adults can lay eggs in your dog’s food and restart the cycle. Freezing the food as soon as you buy it will destroy any maggots, bugs, or eggs that may have smuggled their way in. 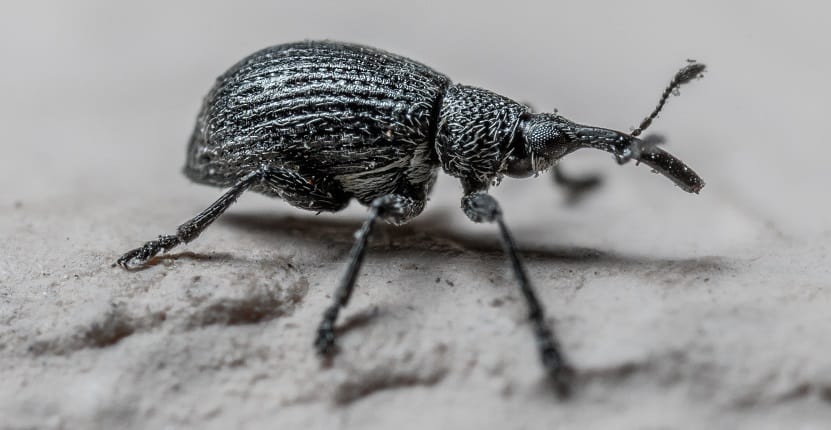 Weevils are small black bugs that mostly attack cereals and legumes. You can find them in corn, wheat, rice, or beans, and they love to sneak into flour bags as well. If you spot some in your dog food, chances are they started in your grains and worked their way into the doggie bag, so you probably shouldn’t store your pet food and human food together. You risk cross-contamination.

A female weevil has a three-year lifespan and can lay 250 eggs or more during her fertile period. Her larvae will feed on the grains and seeds themselves, and their by-products encourage fungi to grow in the food. While weevils – at all life stages – can’t hurt humans or dogs, the fungi they generate are toxic to both. Freezing your dog food for a week will kill any weevils, worms, or fungi.

On this list so far, we’ve seen two cases of contaminated food. Both bags were Purina, and one had meal moth larvae while the other had beetles. We’re still looking at Purina, this time around, the bugs were put in the food intentionally! Nestlé developed a line of bug-laced kibble with extra protein and vitamins. The dog food is infused with the larvae of black soldier flies.

It also contains field beans and chicken. Branded as Purina Beyond Nature’s Protein, the kibble was first marketed in Switzerland to compete with rivals like Insect Dog and Yora from the Green Pet Food brand. Curiously, cat kibble from the same sub-brand has no bugs in it – just chicken, pork, and millet. But the pooches seem to benefit from these bug bits. Would you dare? 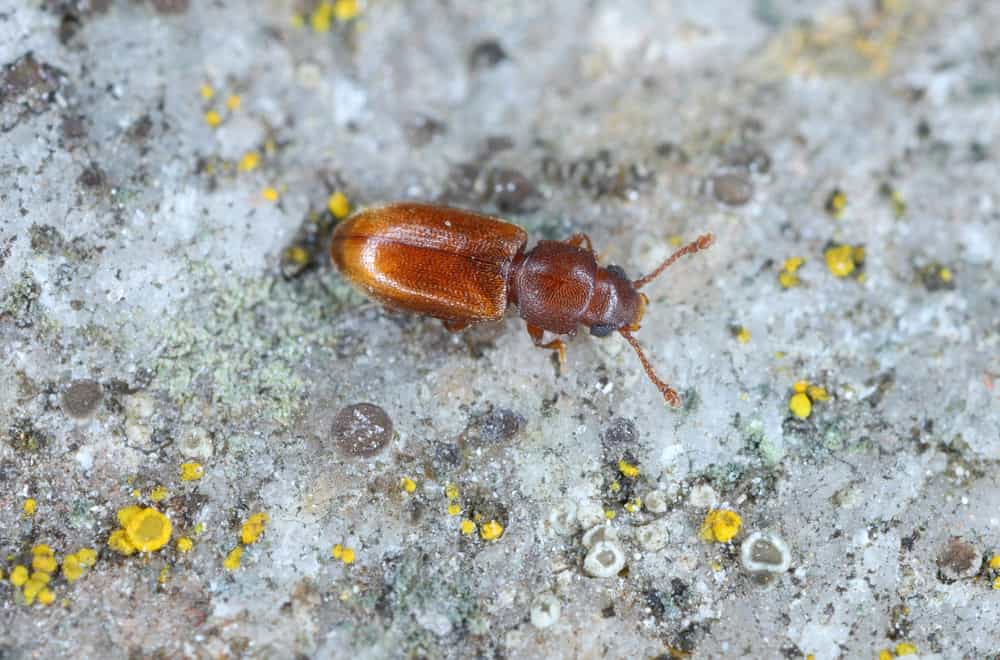 Copra Beetles get their name from copra – the white flesh inside a coconut. But it’s also known as copra once you dry it out, and it’s the favorite food of Copra Beetles – that’s how they got their name. Still, don’t let their colorful chitin fool you. These beetles are a bit like gym bros in their obsession with protein. They feast on cheese, fish, dried meat, eggs, fur, ham, and kibble.

If your dog accidentally swallows a few, there’s no harm done. But these beetles are fast fliers and will lay eggs all over the place. Meaning if your kibble is infested, your dog will ingest more than a few of these bugs, and the more they eat, the worse the potential damage. So if you see any sparkly bits of iridescent green and blue in your dog food, just toss the whole thing out.

We mentioned this species of beetle earlier because they’re common in homes and pantries. And as their name suggests, woolen carpet fibers are their favorite food. But they can also get into blankets and fur, which could lead them to your dog, especially if s/he loves rolling around on your rugs. And in lean times, carpet beetles can snack on grains and dry goods in your pantry.

From there, they could wind up in a bag of kibble where they’ll mate and lay eggs. Carpet beetle larvae are prolific eaters so they could feast on the dog food or get accidentally swallowed by your puppies. The solution is to keep your rugs clean and regularly inspect your dog food store. And as we keep saying, use a separate storage area for pet food. Don’t keep it in the pantry!

The Final Word on Bugs in Kibble

You may have noticed every pest on this list was mainly aimed at human food. This is because kibble is baked at extremely high temperatures to get rid of germs and dry the food completely. If moisture builds up in kibble, it attracts toxic micro-organisms which could poison your dog!

So the primary way to get rid of the common bugs in dog food is to keep it far away from human dry goods and freeze it to get rid of any pests that hopped over. Also, check the expiry dates. Have you found any common bugs in your dog’s dish? Tell us all about them in the comments!